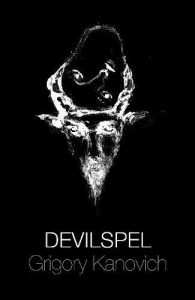 Devilspel tells the story of the inhabitants of a small rural town, Mishkine, in Lithuania in the early 1940s. Though not all of the characters that we follow are Jewish, the novel explores the shifts in attitude towards the local tailors, doctors, farmhands and gravediggers, as the incoming wave of anti semitism wipes the town’s Jewish population from the map.

This is part of the wider story of Lithuania’s Jewish population, a very personal story for Grigory Kanovich who is one of only 5% of 200,000 Lithuania Jews who survived the war.

It is fitting that the novel begins and ends in the local Jewish cemetery, first with a Catholic woman whose husband was Jewish, and then with the ravens. What Kanovich is so good at exploring is how wider political and social upheaval effects daily life and how nature, in its minutia at least, is often markedly unchanged.

The world seemed fresh and good, as though it had just emerged from infancy and was peopled neither by the chosen nor pariahs, nor by the righteous nor the guilty, and there were no tears – only this blue sky and this greenery, this greenery and this blue sky.

Yakov relished the rustic beauty and the pastoral perfection of the world; if anyone was spoiling it, he thought sadly, it was only humans. (p194)

For Holocaust literature, the cruelty and violence doesn’t sit on the surface. It is uncomfortably veiled by the mundane worries of the everyday. The human desire to live in comfort forces Jew and non-Jew to alter their behaviour in ways neither always feels proud of. A young female farmhand allows herself to be baptised and wears a cross around her neck. The apprentice of the tailor moves into his master’s home haunted by the faces of the ancestors who continue to bare down on him even after he burns their portraits. The transgressions made across multiple moral boundaries are painfully relatable leaving the novel one in which many questions are raised, much is forgiven and warnings are quietly laid bare.

There is a sense in which Devilspel feels very traditional in its telling – multiple characters with a narrator whose third person moves between them with ease; a kind of benign distance in the unfolding of tragedy – but there is a beauty in this delivery, an echo of stories already told, portents unheeded that need to be reiterated and strengthened so that we hear them clearly and hopefully don’t repeat them. if anyone was spoiling it … it was only humans.

It took me a while to fully immerse myself in the story, but once I was there, I was captured and held in a way you would expect from the winner of the Lithuanian National Prize for Culture and Arts 2014. I feel very grateful that independent presses like Noir Press, a boutique publishing house dedicated to translating the best of contemporary Lithuanian fiction into English, exist. We need to be reading more translated work, expanding our understanding of Europe in its wider sense, now more than ever. Thank you, Noir Press.

Next week, I’ll be reviewing Asylum by Marcus Low.