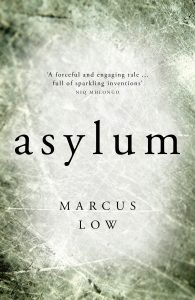 Set only a couple of years in the future, Asylum is a presentation of the journals of Barry Wilbert James, an inpatient at the Pearson quarantine facility for pulmonary nodulosis in the Great Karoo of the Republic of South Africa. These personal journals, begun two years after his incarceration at the Pearson are interspersed by a preface, notes and marginalia made by Barry and various academics who studied the archives at the Museum of the Plague in South Africa, a museum dedicated to the most serious outbreak of an infectious disease since the peak of the HIV epidemic.

This play with an authentic first person is enjoyable and fitting with the writing of Barry James who is also interested in being playful with the truth, in examining what truth and reality are in the face of illness and isolation.

I find it hard to know how to respond to the novel. I was gripped by Barry’s account. There were echos of Mann’s The Magic Mountain, another novel I wasn’t sure how to respond to. The ideas of death, of the purposelessness of life, of genius, of fabrication, of suffering, of longing, of suppressed desire, political corruption, a distrust of authority, all swim together in a novel in which relatively little happens. Barry is ill. He is listlessly interested in escape in various forms. He has therapy. He tries to escape. He ultimately identifies with the institution itself in a mimicry of the human desire for structure that civilisation plays out in all of us regardless of the particular civilisation’s moral fortitude.

There are lyrical passages, surreal dream passages, and the escape attempt across the hot desert landscape is one of my favourites, echoing a sense of forty days trial that TB enhances as breath and thirst burn through Barry’s fragile lungs. It is an apocalyptic account that nonetheless plays with the idea of human continuity. It is contradictory and sharp enough to cut itself.

I don’t really want to say more. Out earlier this month, you’ll know if the book appeals to you. Asylum is a novel that begs a rereading, playing with the idea of reconfiguration at an individual and societal level, physically and narratively.

I’m a little behind myself, but hopefully later this week I’ll be reviewing Supper Club by Lara Williams.