I deliberately read this novel slowly. Easily devoured in a few hours, if this is the kind of writing you like, you don’t want it to end. Reading Die, My Love was like finding a voice you’ve heard calling at a distance out walking somewhere, in woods or at a crowded beach. It’s a voice that feels both deeply familiar and painfully new. It’s raw and wild and angry and filled with a passion and desire that is both recognisable and selfish. It is a voice that speaks what many dare not. END_OF_DOCUMENT_TOKEN_TO_BE_REPLACED 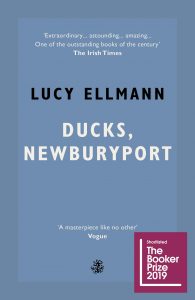 The fact that I’ve long wanted to read this novel and have always been a fan of stream of consciousness literature, Woolf, Joyce, Finnegan’s Wake, river run, on and, the water cycle, doesn’t detract from the fact that reading it takes a lot more concentration than the thinking it represents, brand, identity, big concept, Heinz, Booker, Baileys, drinking, drunk on listening to the sound of the thoughts of the housewife who survived cancer and now makes pies, missing her children, especially her little boy whose chubby toddler phase was lost to her, to her illness, to the cancer, the cells splitting and reproducing in naughty, naughty ways like her DNA was having a tantrum ♪We plough the fields and scatter♪ shows the fact that I, like her, am no longer in the prime of life, no longer as actively angry and filled with belief that I can change anything, the fact that I want a book that not only tangles and mesmerises me with its words, with its poetry, Darrieusecq, why are the Europeans so much better at that kind of fiction? Ariana Harwicz, but also picks me up and lifts me on a journey that I can slip in and out of as I leave the house on the school run or answer an email so the fact that I am reading at all becomes a miracle of time management, of priorities, and the incredibly long sentences of this very clever and diverting book with their interrupting sections about the story of a mountain lion are hard to read piecemeal, regardless of its cleverness, regardless of the messages it wishes to send about the way we live and think today, makes for a novel that I don’t find easy to read but the fact that I appreciate it anyway and am glad such literature has a place among the modern shelf makes this wonderful flood of thought a novel to celebrate ♪the good seed on the land♪ and work hard to harvest the fruit of journeying into another mind added to the fact that it was rejected by the establishment and published by an independent press, the wonderful independent Galley Beggar Press.

I’m reviewing Die, My Love by Ariana Harwicz next. Can’t wait to review that one. I won’t be doing it in the style of the novel though, unlike this one (just too hard to resist, even though it’s been done before). 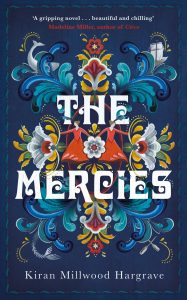 I loved this book. It does what novels can do so well which is take an interesting subject about a far away place in time and space – it is mostly set in a remote fishing village in seventeenth century Norway –  and turn it into a fresh, breathing creature that speaks to the world we live in today.  END_OF_DOCUMENT_TOKEN_TO_BE_REPLACED 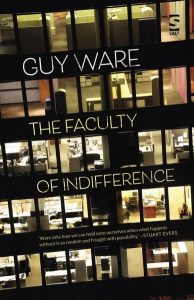 Robert Exley works at the Faculty, a counter-terrorism branch of government in which his father also served. His wife, once a member of the Faculty herself and a supposedly more promising one, is dead. She was hit by a bus years ago and Robert lives with their son, Stephen, who asks him every night how his day was – ‘If I told you I’d have to kill you’ being the standard response – and who writes a diary in code on his mother’s old typewriter, leaving the pages temptingly on display for Robert to decode. This diary is the only way in which Stephen ever fully communicates with his father – assuming he wanted his father to read it all along, for the novel makes it clear, nothing should be assumed.

Divided into two halves, the four or five years before he meets a prisoner in the basement, and four or five years later when he does, the novel is also divided into before Stephen goes to university and when he returns. In the first section we hear Stephen’s imagined telling of his grandfather’s life as a beacon keeper. For his diary morphs into a fictionalised biography rather than a daily account of his life. This telling is somehow implicated in a particular case Robert is handed by a colleague that leads to the incarceration of that prisoner in the basement. END_OF_DOCUMENT_TOKEN_TO_BE_REPLACED 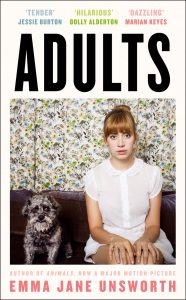 The third novel from the author of the critically acclaimed novel and film, Animals, I came to the novel through chatter on twitter. Oh, I thought, people are saying some great things about this book, I’d love to read it.

I haven’t read Animals or seen the film so I’m probably quite a rare reader of this novel, coming with fresh eyes, though I suspect, from reading a review of the film, that Animals has a similar approach to Adults, one that looks at its female characters not in terms of likeability but in terms of verisimilitude, warts and all. END_OF_DOCUMENT_TOKEN_TO_BE_REPLACED