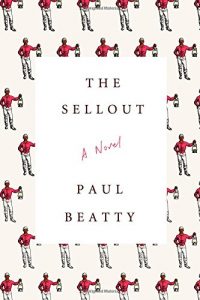 ‘For Hominy any day when he could personify American primitivism was a good ol’ day. It meant that he was still alive, and sometimes even the carnival coon in the tank misses the attention. And this country, the latent high school homosexual that it is, the mulatto passing for white that it is, the Neanderthal incessantly plucking its unibrow that it is, needs people like him. It needs somebody to throw baseballs at, to fag-bash, to nigger-stomp, to invade, to embargo. Anything that, like baseball, keeps a country from actually looking in the mirror and remembering where the bodies are buried.’ (Loc. 1353)

Sellout is one of the nicknames of the narrator of The Sellout (his other is Bonbon), a black man who reinstates his city, Dickens, a deprived area unofficially labelled as L.A.’s hood, through a mass programme of segregation inspired by the surviving actor of a racist television series from the 30s and 40s, Hominy. Hominy begs to become Sellout’s slave, going as far as asking to be whipped.

What begins as a birthday gift for Hominy – redrawing the old city limits of Dickens in paint and putting segregated seating signs in a local bus – grows into creating a segregated local school by faking the coming of an all-white school over the road, to selling signs like ‘Blacks Only’ and ‘No Whites Allowed’ to shops, businesses and even the local hospital. Crime rates and unemployment drops, the children’s attendance and attainment levels soar, even the rival gangs celebrate hood day without violence. END_OF_DOCUMENT_TOKEN_TO_BE_REPLACED

This is the first Booker shortlisted novel I’ve read this year and Hot Milk didn’t disappoint.

Sofia travels to Spain to accompany her mother in her treatment at a private medical centre. For as long as Sofia can remember her mother has complained of aches and pains and has needed Sofia to tend to her, to fetch and carry, to bear the burden of care.

Her mother has mysterious pains in her feet that make it difficult for her to walk. She says her feet are numb, senseless, useless. When she can walk, she hobbles.

The medical centre forces Sofia and her mother to confront the mental health issues that beleaguer both their lives. END_OF_DOCUMENT_TOKEN_TO_BE_REPLACED