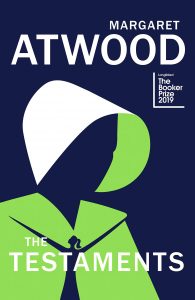 Alongside many, I was eagerly awaiting The Testaments. I had it on pre-order and dragged it from the packaging with delight. How was Margaret Atwood going to take The Handmaid’s Tale further? Would it reference the television programme that extended the original novel? What more could be said by June?

Once again, Margaret Atwood showed what a fantastic storyteller she is by choosing a story that could be read on many levels. You could read The Testaments without reading The Handmaid’s Tale; I suspect it would stand as a novel on its own. Similarly you could definitely read The Testaments without having seen the television series. However, there is a greater richness to the story when you can hold them all together. There is something very interesting about this idea of using multiple media to expand and enhance a world. It is not new, of course, but it does provoke interesting opportunities for the writer whose skills are pushed in new directions. It can’t have been possible to write this novel in isolation from the response to the original novel and then the television series. How do you write something new on a subject so many see themselves as being experts in?

Atwood’s answer was pure delight: Aunt Lydia. [If you want to read this without spoilers – best to stop here. I don’t tell it all but you might just want to read the novel fresh, so feel free to read this afterwards and take issue with me.] Although the story of baby Nicole is how the three Gilead tellings all join up, choosing Aunt Lydia as one of the narratives forming part of The Testaments seemed an excellent choice. Here was a woman we had only really thought about from without. A bad woman who occasionally showed a violent kind of compassion. What was her story? Yes, I really badly wanted to know. How did she become such a central part of Gilead’s rule?

Similarly, listening to baby Nicole’s elder sister, a girl grown under the Gilead regime, was another angle readers and watchers had yet to explore. What would it be like to absorb all that piety, descrimination and disceipt? What would it mean to grow up in a world where women can’t write, where they are always beneath men for whom they are nothing but temptresses, their best hope in life to become a wife and bear children of their own? The Testaments explores that angle, looks at the complexities of Gilead life and even finds a few virtues, albeit ones undermined by the practice rather than the aims of the regime.

And Baby Nicole herself has a story and presents as a rather typical, middle-class teenager, full of entitlement and naivety. Her involvement in the anti-Gilead movement, Mayday, her behaviour and Canada’s attitude to Gilead, allow Atwood to ensure that no government comes away totally unscathed.

It’s the choice of characters to focus on, almost more than anything else, that delights me about The Testaments. I’m very happy to rush through the text, keen to unravel the downfall of Gilead, but I’m also riveted and horrified all over again by how easily human beings can use difference as a point of power and control. This is a formidable novel from a master storyteller. Go Margaret Atwood. I’m huge a fan.