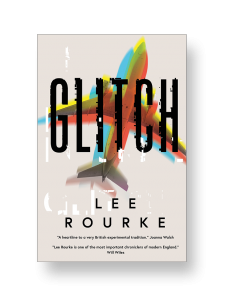 L-J is travelling back to England after 20 years in the States. The journey begins with a plane ride that is anything but routine. From the very start we are introduced to the idea of the glitch, the fault in the system, the fracture that reveals what is below the surface. Something happens to the plane, some kind of tear in business class that decompresses the aircraft and forces an emergency landing.

L-J films it. L-J photographs the glitch on the screen when it’s display doesn’t work correctly. He has always loved those little fractures that have come, through long discussions with his mother, to represent not only what art should attempt to unveil – the imperfections that reveal different realities that lie beneath – but the essence of what it is to be human, to be alive. We are the glitches.

This initial plane journey holds the whole novel together and strangely, more than many novels I’ve read recently, the story feels tightly focussed, more like a novella, working around and towards one set of circumstances that chip and crack and poke at the fractures in his own life: his relationships with his father, his mother, his sister and his ex-girlfriend. The rip in the plane tears into his own life like the ‘rip in the fabric of our reality’ that is the Dunwich museum display of the sunken city of Dunwich. As his mother says, the museum is important because without that rip into their reality there’d be no way of seeing the city hidden beneath the waves, ‘There’d be no one to retell our stories from the fragments of other stories left behind’.

When L-J does land he discovers his sister, who has always been good at hiding things from him, has been keeping the severity of his mother’s illness a secret. That secret and so many others need to be revealed in order for L-J to revel in the beauty of glitches and fractures that form his and his mother’s lives.

I won’t say more. Retelling the plot would be unfair to those who have yet to read it. It’s a thoughtful, meditative story with a singleness of purpose that gives the novel the polish of something sharp and poetic.

I’ll be reading The Testaments by Margaret Atwood next.