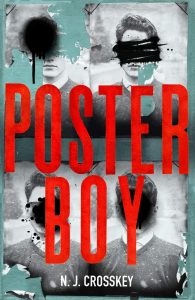 Set in a fascist Britain, in the not too distant future, two women, Rosa and Teresa, fight to stay alive with some sense of integrity as the nation takes further steps towards totalitarian leadership where all citizens are monitored and given access to education, food and health care on a scale dependant upon their heritage, opinion and behaviour.

Brilliantly exposing the ease with which individuals and wider populations can be manipulated for political gain, Poster Boy begins with the story of Rosa and her twin brother, Jonny. Jonny is the poster boy whose real personality was anything but perfect. When he died in a fall from the railings of a pedestrian motorway overpass, having balanced on the rails drugged to the eyeballs and filled with a sense of his own immortality, his dead body caused a pile up. One of the cars belonged to the leader of the alternative left opposition group, Gridless. Inside the boot were plans for an attack against the government that the authorities hadn’t seen coming.

Suddenly, Jonny is no longer a wild teenager out for a good time, but a squeaky clean hero whose death was a sacrifice for the nation. A poster boy for the ordinary decent Englishman struggling to thrive in a society of immigrants, non-Christians and terrorists.

While Rosa’s life falls apart under the strain of this deception and her parents’ grief, Teresa faces a different battle, one to save Gridless and their mission at all costs.

Poster Boy is a fun ride. Fast paced and unpredictable, there is a pleasing lack of sentimentality with a clear message about the dangers of mass media control. It wouldn’t take much to go from our world into this one and this makes for discomforting reading.

A real of-the-moment novel, Poster Boy is a disturbing portent that readers who enjoy this kind of thing will lap up. I wouldn’t be surprised to see a television adaptation before too long.

Next I’ll be reviewing White by Marie Darrieussecq.