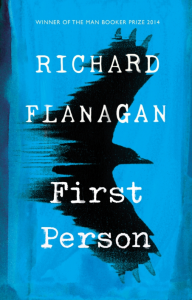 Kif is desperate to be a writer. Taking odd jobs and shift work, he spends every last minute scribbling or tapping away at an old computer in the tiny spare room regardless of his baby daughter and pregnant wife. Unsurprisingly, the lack of money begins to press heavily upon them.

Then Kif’s old childhood friend, Ray, gets him a job ghostwriting the autobiography of Ziggy Heidl the notorious Australian fraudster. The chance to be spoken of as a writer, but mainly the offer of a large sum of money, takes Kif from Tazmania to Melbourne into the frustrating world of Heidl whose stories play upon the sympathies of the listener, encouraging them to create their own version of Heidl’s past, one which hangs upon a few cleverly chosen but mundane words that fail to withstand any historical scrutiny.

Despite having screwed the banks for millions, Heidl appears to have a boring life. He comes alive only in his ability to manipulate anyone he comes into contact with, enmeshing Kif and others in the sticky web of his endless fabrication.

First Person is a clever novel. The fad for authenticity, the personal story, the authentic singular unique perspective and voice, memoir, the first person account, is explored and exploded. Fiction somehow always wins out, revealing truth to be a slippery thing that seeps out of the constraints of narrative whilst simultaneously being unable to be explored without it. What really did happen that day in the woods with Heidl? Even Kif seems unsure… Who do we credit with the primacy of our first person? Are we really in control of our own story, or are the lives and stories of others constant impingements upon the development of our own?

First Person was both fun to read and mildly depressing. There is one scene where Kif meets a famous author, Emily Coppin. This is years after his attempts to ghostwrite Heidl’s autobiography. He has become famous as a television writer and producer. Emily says the novel, ‘as a mode of narrative it’s dead’. Their conversation continues:

Everyone wants to be the first person. Autobiography is all we have. I mean, isn’t that what you do in reality TV?

I don’t know what I do, I said. I just go in each morning and make it up.

That’s where we’re different then, Emily said. I don’t make it up. I hate stories. We all hate them. We’ve heard them all before. We need to see ourselves.

It sounds like literary selfies to me, I said.

And of course, Kif is, ostensibly at least, writing an autobiography, isn’t he? This self-reflective, postmodern, tongue-in-cheek, self-mockery is amusing and mostly provocative rather than too arch. What do the literary trends say about our time? Is it all about getting likes? What kind of book should one try to write and at what cost?

Anyway, I’ve been very slow to write up my reading this month, so another review on Ali Smith’s Autumn follows in an hour or so.