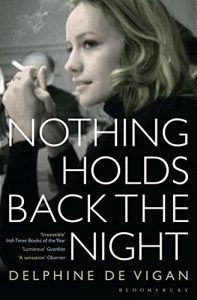 This autobiographical novel has won several prizes and it is obvious why. A biography of the narrator’s mother, Lucile, the book is self-reflexive, critical of its own approach and the narrator’s ability to summarise the experiences of a woman she only really knows from one angle, that of daughter.

Not only is the approach self-reflexive, it is also riddled with anxiety about how the book will be received by family and friends. Certain family secrets and difficult periods that have been comfortably forgotten or nestled under the weight of other warmer memories, are brought to light and discussed from different perspectives. The idea of writing a straightforward biography is itself put under question.

Alongside these questions of authenticity and daring comes the actual story of Lucile which is also fraught with emotional intensity, her childhood filled with glamour, tragedy and possible abuse and her adulthood challenged by mental illness.

This makes Nothing Holds Back The Night a challenging book to read, not that it is difficult in its technique but that it forces the reader the question their own attitudes to memory, family values, and family roles. When difficult things happen, how do we react? The idea of blame is something the book attempts to explore and in so doing looks at how hard it is to ascribe events to certain causes, reminding us of the whimsy of reality ready to alter plans and mess with the best or worst intentions. Though I wouldn’t call it a page turner, there is a depth to the book’s exploration of family relationships that lingers in the mind and the way the past becomes family myth is delightfully depicted, leaving clear images of certain events despite the many different memories surrounding them. The ripples certain events cause in families, the way certain references or phrases alter ongoing conversations or relationships, builds a real sense of what it means to belong to a shared narrative. That too is thought provoking.

I wouldn’t say that I enjoyed reading Nothing Holds Back The Night, but I admire it greatly. The writing is as sharp as its observations are visceral. It’s a truly impressive book.