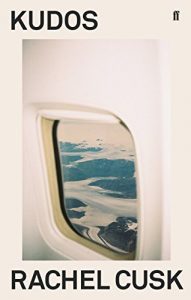 I’d been looking forward to reading this novel for such a number of weeks that perhaps my longing to read led to an unnecessary level of anticipation which was undoubtedly going to cause disappointment. It isn’t that I didn’t like this novel, or enjoy the writing in the same way that I enjoyed the writing of the other two novels in the trilogy, I think it’s that I expected more, I wanted it to go further than it did.

To give this some context, I felt that the two previous novels progressed from each other. The main character and narrator, Faye, brilliantly adept at getting others to tell their stories whilst remaining silent herself ﹘ a trick we can’t authenticate given that the story comes through the narrator and perhaps she reveals as much of herself in conversation with these other characters but just chooses not to tell us ﹘ seems to be moving towards a less passive attitude to the world. It’s as if the novels are about finding that negated voice of self, of being brave enough to speak and make her own mark (ironic, I know, given that the narrator is also a writer – another part of her life we aren’t given full access to: we see the book tour but not the book talk or the book itself). So when this novel opened on an aeroplane, something it shares with the first novel, Outline, I instantly felt deflated. Perhaps I wanted this novel to take on the patriarchal wrongs that the previous novels depicted, and perhaps the narrator’s attempts to do this in Kudos just weren’t enough for me but did represent what this character was capable of, and also what most of us are really up for ﹘ no loud angry disruptive world shattering change, but instead a direct look in the eye (you’ll see what I mean when you reach the end of the book).

Kudos is clever. There are complex issues raised (Brexit among them). The technique of allowing other people’s’ words to outline the main character remains enthralling, still scratches at one of the itches of truthfully expressing some aspects of existence, and still feels important and relevant and necessary. But, and it’s a big juicy, twerking one, what now?

Perhaps I should return to the title as it is discussed in the novel. Kudos didn’t used to be a plural noun. It is a mass noun, like information or generosity. It means praise or renown. Is Cusk trying to suggest that identity should be a mass noun, that our move to make kudos a countable thing, should work in reverse for identity which should become something not singular but multiple, made of the many interweavings of peoples and histories to make something fluid?

I suppose I should be glad that I’m sent into this kind of thought process but am I missing something? Should I feel so deflated about the possibility of female success? What about a recognition of privilege? And I really don’t want to ask that last question because I don’t want to suggest Cusk is a writer who only explores middle class experience because that in turn suggests I can’t imagine anyone but a middle class person being able to think in this narrator’s way (which I don’t mean to suggest, though it is interesting that most of the characters in this novel speak with an eloquence closely resembling the narrator’s), and yet class and privilege are the milieu in which these novels operate. That isn’t a bad thing, per se, all walks of life should be open for exploration, but the novels are sometimes, for all their self-consciousness, remarkably unreflective about social privilege, but this could be an unfair point to bring up because they aren’t set up to explore any other social privilege [perhaps there is a little exploration of other walks of life in Transit where she talks about her house, her neighbours and her builders] than that of the male. And she says of that? Something less than I’d hoped.

I am perhaps being mean spirited, but her narrator Faye is much more overtly judgemental too. She does speak back in this novel, and though many of her searing comments are often overlooked, they can be cruel. Faye no longer hides her opinion in the same way as she did in previous novels and this Faye, annoyingly, is less palatable. Again, that’s an awkward feeling to admit and may in any case be part of the point. I should be pleased to hear her pronouncements, but instead they feel a little bitchy.

Similarly the appearance of a barely veiled Knausgaard questions the value of fiction that attempts to mirror life. This man sits apart from the group, brooding and hunched over his meal, and yet his rendering of the domestic life makes everyone love him. No such luck for women, like Cusk of course, who do the same. His brooding is appealing, sexy even. The sullen silence of a female author like Faye, however, creates a kind of blank mask against which critics and journalists, other people in general, can see what they want to see which is mostly a reflection of their own stories and opinions.

As I said, the novel is still fun to read and offers up questions and problems for the reader to consider. In the end, my disappointment comes from losing my empathy for Faye as she seems to lose her empathy for others.

I would still recommend it, but I wish the trilogy had ended with more of a bang than a whimper. Perhaps this says more about me than the value of this novel. If you enjoyed the others in the trilogy, you will want to read this one. You can read my opinions of the first two books here: Outline, Transit.