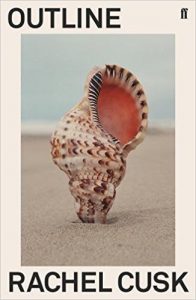 I’ve come to Rachel Cusk late. Having heard so much about her and her work before even turning the first page, I wasn’t sure what to expect. What I found was a very compelling novel almost of absence. It was as if the main character existed only to hear and record what others said to her, as if she herself were only an excuse for others to express themselves and show their best theories and thoughts. Of course, what I read was actually what the narrator chose to tell me. The self-effacement was a choice which I couldn’t be certain existed for the other characters. Perhaps this character was as verbally present as they were, but that part of the story was elided for the purposes of retelling.

It’s delightful to read a novel that has a sense of movement but no discernible plot as such. The narrator goes to Athens to teach creative writing. She teaches, meets some friends and acquaintances, then prepares to travel back. There is no great moment of epiphany (apart perhaps from the moment at the end with the other woman coming to teach screenwriting and live in the apartment that the narrator has been renting), and the dramatic moments fall quietly into the fabric of her days, so that a verbal attack by a student and an attempted kiss from her neighbour on the airplane she flew in on, aren’t the central moments, as they might be, but are instead part of the stories of these other people’s lives who seem to have taken all the drama, all the comedy and tragedy for themselves.

I mention comedy, tragedy, drama for a reason of course. This is Greece after all and it’s hard not to feel the importance of the family saga – that much repeated heart of all Greek drama whether Gods and their children are directly involved or not – of legacy and desire turning normal life into something more grand whilst the narrator’s own life happens quietly in the margins as she excuses herself from class to talk to her son or negotiate with her bank. Her drama is on hold, almost as if the chorus has taken over. So are we seeing her in relief? Is she being depicted by virtue of what she doesn’t say? Her outline chalked against the backdrop of all this other noise? Or are the characters, whose lives they readily describe and tease into shape, creating their own outlines, shapes they feel comfortable to move about within? Or is it both, are we always both creating our own drama of self and living within the outline the world creates for us? Both hero and chorus? Free to act and define ourselves and also determined and shaped by what surrounds us?

The writing is clever, observant and very female. There is great power in this ability to listen and reflect, the distance just enough to cause pain without culpability.

I thoroughly enjoyed Outline and look forward to reading the others in the trilogy and thinking further about what Rachel Cusk is saying under the surface of everyone else’s chatter.

I’ll be reviewing Only Ever Yours by Louise Anne O’Neill next week, but in the meantime feel free to check out my interview with Stephan Collishaw for Author QH. As well as discussing his writing, we also talk about the small press he founded specifically to publish contemporary Lithuanian fiction in translation, Noir Press.