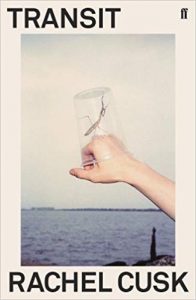 I found Transit, the second in Rachel Cusk’s trilogy,  just as compelling as Outline (which I review here).

The ostensible plot – action, as in Outline, not being the driving force of the novel – is about the narrator moving to London and having her house renovated. Her children are forced to move out for two weeks. Her neighbours, who live below, are aggressive in the extreme – something she was warned about by the previous occupier. She teaches, goes on a date, and visits her cousin who bullies his new wife. This doesn’t tell you what’s actually happening in the novel, however, which expresses a significant shift in the outlook of the narrator.

The distinction between the two novels can, for me, be summed up by the narrator herself who says the following in conversation on a dinner date:

‘For a long time, I said, I believed that it was only through absolute passivity that you could learn to see what was really there. But my decision to create a disturbance by renovating my house had awoken a different reality, as though I had disturbed a beast sleeping in its lair. I had started to become, in effect, angry. I had started to desire power, because what I now realised was that other people had had it all along, that what I called fate was merely the reverberation of their will, a tale scripted not by some universal storyteller but by people who would elude justice for as long as their actions were met with resignation rather than outrage.’ (Transit p198)

The narrator’s voice is stronger in this novel. We hear more of her. She isn’t just a sounding board for other people’s narratives, but, as the title suggests, is in transit into some new mode of being. There is still an overwhelming sense of the power of other people’s stories, how they weigh on the narrator and ultimately effect change upon her, or describe her through their difference to her own story, but there is ‘change far beneath me’ (last page) moving her out of passivity, away from being inscribed upon towards ascribing meaning and writing her own story instead of merely reading it.

There is still a fascination for the ways in which we seek to create meaning and identity out of the events we experience, but in Transit the narrator begins to desire more active control over the shape and interpretation of her own story. Transit is an engrossing and moving novel that takes us from resignation towards outrage, that expresses revolution by stealth.

Next week I’ll be reviewing Fugitive Pieces by Anne Michaels.