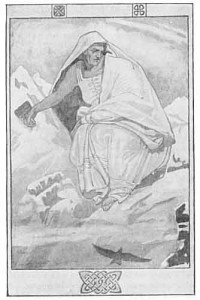 Why is my face so dark, so dark?
So dark, oho! So dark, ohee!
Out in all weathers I wander alone
In the mire, in the cold, ah me!
(Wonder tales from Scottish Myth and Legend by Donald Alexander Mackenzie)

According to legend, Dark Beira, the subject of this refrain, is the mother of all the gods and goddesses of Scotland. The Queen of Winter, she is ancient, angry and terrifying, her complexion dark blue, her teeth rust red, her hair as white as frost. She roams the wilds of the north, growing ever older, but never dies. Because always, at the end of winter, she drinks the magic waters of the Well of Youth, which bubbles up in the Green Island of the West, and grows young again. Then the whole pattern repeats in an endless cycle.

‘I don’t believe it,’ says Sam, Freya’s son in Beyond the Sea. ’Beira couldn’t grow old that quickly and then become young again. I think it’s really just a story about the seasons.’ Indeed. But nonetheless I love it.

I’m a huge fan of myths and legends – tales which, as Freya says, ‘might not be fact, that can’t be proved, but still might be something we choose to believe in.’ They are narratives which explain ancient cultures, their customs and history, their anthropomorphic approach to nature and the landscape around them. What is Beira, after all, but the creation of a people concerned by nature’s long, hard winters and relieved by the almost miraculous arrival of spring? Beira, like the harsh weather itself, rouses the dangerous whirlpool of the Corryvreckan (by washing her shawl within its waters), brings the snow (by laying her clean white shawl upon the mountains) and creates torrents that cause lochs to form (by forgetting to cover over a bubbling well).

In the western islands of Scotland, there are also many myths of the sea. They find their origins perhaps in the restlessness of the ocean currents, but are then transformed into stories of the Blue Men, who seek to sink ships in the perilous waters of the Minch, or the Maid of the Waves, who, like the tides, protect and curse in equal, fickle measure. The stories are rich and colourful, demonstrating the ancient acceptance of the supernatural in the everyday – mermaids, sea fairies and seal-folk, the magical Green Island hidden in the west, where the spirit of spring resides. As a lover of both history and myth, it is the exploration of the crossover, one into the other, that I find particularly fascinating and love to explore in my own writing – the blurred line between fiction and fact in storytelling, between what is ‘real’ and what is imagined. And that in some cases fact is indeed stranger than fiction.

As old blind Torin, a storyteller in Beyond the Sea, says, ‘Just because a strange thing happens, it doesn’t mean it cannot be true. Strange things happen every day, peculiar things, odd coincidences, events that come to pass that perhaps we have dreamt about. We have more difficulty accepting these things as real. But it does not mean they are not so…’

Melissa Bailey’s second novel, Beyond the Sea, came out earlier this month. This is the book that will linger in your mind as you enjoy your beach holiday. Thought-provoking and compelling, I have reviewed Beyond the Sea and Melissa’s first novel, The Medici Mirror. Look out for my interview with Melissa coming soon to Authors QH.

The uncompromising and startling Heidi James, whose brilliant novel Wounding came out earlier this year, invited me to take part in the ‘Writing Process Blog Tour’ last week so here I am. It’s a tour of writers’ blogs, asking them to answer four questions about their work. You can read Heidi James’ responses here and follow back through the tour from there. Here are my responses:

I’m working on four projects at the moment: a short, short story collection, Glitches, due to come out sometime this year with Andrews UK Limited; my second novel about two half sisters, one half-Malawian and one English, who swap countries; my blog in which I’m attempting to read and review a book a week; a children’s story, ‘The Magic Story Pot’, which will be performed by Storyspinner at the Victoria and Albert Museum of Childhood in August this year.

2. How does my work differ from others in its genre?

Whilst I understand the uses of genre to categorise books for certain readerships, I also find the idea of genre limiting. I love great books and some of those books fit neatly into certain genres and others don’t. My novel, Home, has been marketed as a horror novel, but it doesn’t really fit the conventions of the genre. I have been describing it as an unpalatable novel. In my mind the unpalatable borrows from all sorts of genres – slipstream, horror, speculative fiction – to create something that should discomfort the reader, not terrify them, but make them uneasy and ready to question the world around them. Of course, all sorts of writing does this, it’s just a label I’ve chosen for my own work.

Glitches is very much in this unpalatable zone. There is a story about a cancer ridden professor who forces his nurse to breastfeed him and another story about a woman who goes slowly mad when she can’t force the world to cohere into a conventional narrative – she begins to fixate on what doesn’t fit, the glitches in time or space that we all experience when we think someone is behind us only to turn and find no-one there.

My second novel, however, is something rather different. Whilst it is ostensibly a more straightforward literary fiction novel, the half-Malawian sister uses other people’s discomfort in asking about her heritage to pose as a man at university and the English sister spends a lot of time questioning what it really means to give aid to another country. It seems I can’t escape gritty or dark subjects. Whilst I don’t thing any of my practice differs dramatically from others, we each of us have a unique voice and I believe that none of us would ever be able to tell quite the same story.

This is a question I’ve asked myself a lot. It’s a question my family has asked me a lot and it’s something friends say when they get round to reading my work. ‘I would never have imagined you would write anything so dark,’ they say. Thinking about the unpalatable was one way to answer the question. I realised that I was drawn to writing about things that make me feel uncomfortable and as writing is the way in which I try to make sense of the world, it’s those things I want to write about. I see people – a man whose right hand has lost every digit from the second knuckle to the tip, say – and wonder what happened and who they are. Things happen in the world and I wonder why. Writing is a way of exploring those questions and hopefully taking readers along with me. I don’t know where human beings would be without the power of stories and one day it is my hope to create something that stops being my story and becomes a story that people start to tell as their own.

4. How does my writing process work?

I would like to say I have a routine. I would like to say that I write at a certain time each day and write a certain number of words, but that only happens sometimes. When I do write like that, it’s wonderful, but most of the time it really happens when I simply can’t hold the ideas in anymore. Something, a person, an event, sets me off down the path of wonder, and eventually, after a lot of thought, that something becomes a story shape that demands words. I’m not a writer who meticulously plans – though as I say, I do have a shape in mind – because I like to explore through the actual writing itself, the first draft being the best way I know to tell myself a story. Of course, after that, there is a lot of editing and cutting and adding and generally making the story more visible in places and more subtle in others, hopefully better.

Next week I’m passing the blog tour on to Emma Claire Sweeney and Melissa Bailey.

Emma Claire Sweeney’s fiction has won Arts Council, Royal Literary Fund, and Escalator Awards (for which she was nominated by Jill Dawson), and has been shortlisted for several others including the Asham, Wasafiri, and Fish. This year, Emma Claire and her writer friend, Emily Midorikawa, launched Something Rhymed – a website about female literary friendship that attracted over 3000 hits in its first month alone. Her debut novel, The Waifs and Strays of Sea View Lodge, is inspired by her autistic sister.

Melissa Bailey was born in Derbyshire in 1971 but grew up in Lancashire. She went to Lincoln College, Oxford, where she did a BA in English Language and Literature. Then she moved to London to study law and practised as a media lawyer for a number of years. The Medici Mirror is Melissa’s first novel. She is currently working on her second.

Look out for their posts next week.