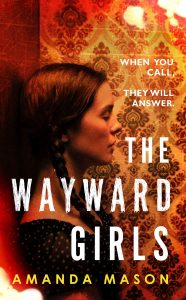 Told across two timelines: one in 1976 when Loo and Bee were children living on a farm in Derbyshire with their three other siblings and their father, Joe, and mother, Cathy; the other in the present when Lucy (Loo) is the only child living close enough to visit Cathy, who suffers from dementia and lives in a care home. What connects the two is the farm house they lived in and a paranormal investigation that began when a police officer was called to the house by Cathy back in 1976. After days of knocking on the walls and slammed doors, a hail of marbles was pelted down on the two older girls and with Joe away working, Cathy was scared. All these years later, a new investigation is beginning and Cathy has been contacted by the new team of researchers looking for evidence up at the farm.

Lucy feels forced to intervene when her mother experiences what she describes as a kind of visitation at the care home, causing her to leave her room and to fall badly. Cathy won’t back away from the new investigation, especially when she discovers that the lead researcher, Nina, is the daughter of one of the team who first came to the house all those years ago.

Slowly, we uncover what happened in the past and why Cathy and then Lucy feel compelled to be involved in the present. What happened to Bee? What was and is really going on in that house?

What good does it do to try and interact with things pressing at the edges of our senses?

A ghost story with several twists, there are many discomforting moments that question our easy sense of what is real and what not. Added to that is a suggestion that stories themselves generate reality, have a power all their own that can’t always be controlled.

It’s a fun, fast-paced read and to say anymore would spoil the story. Filled with the intensity of young desire, as well as the complex ties of familial love, The Wayward Girls is a thrilling mystery.

Next week I’ll be reading What It Means When A Man Falls From The Sky by Lesley Nneka Arimah.