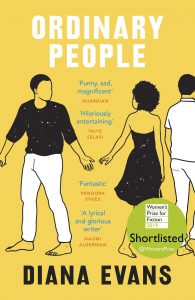 Ordinary People follows the lives of two couples as they struggle with the difficulties of ordinary, family life.

Melissa and Michael have a new baby and a new house in London. They seem like the perfect couple, but Melissa’s shift to freelance work begins to make her feel trapped in her own home, jealous of the greater freedom her partner, Michael, enjoys.

Damian and Stephanie live in the suburbs, near Stephanie’s parents, with their three children and Damian commutes to London for work. This separation of work and home has built a wedge between Damian and Stephanie that grows when Damian’s father dies, forcing him to reconsider what he is doing with his life.

Damian and Michael are friends from university and this brings the families together, allowing for their experiences of family life to be shared, contrasted and contested.

The novel has many carefully placed frames with thematic suggestions: the development, movement and decline of Crystal Palace; a party held by two brothers in South London; John Legend’s ‘Get Lifted’ album (there is a song on the album called ‘Ordinary People’); Obama’s Presidential success and the death of Michael Jackson. For while the novel is definitely about modern marriage, both members of each couple are part of the black British community and their interaction with the different aspects of their heritage is a significant part of their ordinary journey. For despite all the similarities, all the shared ordinariness, Michael thinks at one point about the difficulties of being with a white girl he is dating and he finds it annoying that he has to explain certain things to her because there is a difference ‘in the lenses behind their eyes, in the prisms of their minds, as defined by the outer side… she did not know what he saw when he walked, the necessity and the laughter and the sadness of the blackness around him – the beauty of three black boys singing in the street yesterday, or the menace in a St George’s flag hanging from a deep-southern balcony, and in that same deep south the never-ending sorrow for Stephen, for all the Stephens and the murdered ancestors of Stephen. Or the sweetness of that moment at the soya milk just now, that passing brotherliness. She would not smile. She would not know… Her life was a different language’ (p191). And in this way the nature of what ordinary means, of how one person can or cannot see through the prism of another’s eyes, in a myriad of different ways, is explored in the novel.

Ordinary People is a very clever book that documents how we live now. I enjoyed its brush with ghosts and spirituality. I recognised the stresses of early parenthood and the pressures that imposes on partnership; the need for emotional space, intimacy and personal growth that sometimes isn’t easily found within your own partnership in the daily rush of life. It’s no surprise that the novel has been shortlisted for this year’s Women’s Prize. Ordinary People is a formidable, poignant novel.