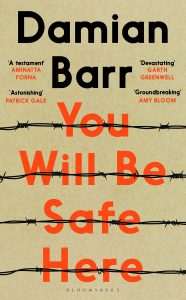 You Will Be Safe Here is an exceedingly powerful book with a narrative that weaves and twists in exciting ways. It might be tempting to say that the book is really about one person, Willem, a young boy sent to a camp in the outback where he can be reeducated into behaving in ways white South African Boer society would like, but in actuality the novel is threaded with multiple stories and perspectives.

The camp Willem is sent to is barbaric. It is run by an old Captain who lives with the legacy of the Boer Wars and believes in reclaiming a South Africa long dead. He trains the boys as if they were in the defunct national service, serving them inadequate food rations, making them crawl under barbed wire, forcing them to dig all day in the heat for his grandparents’ treasure buried long ago when they fled the English in the Second Boer War.

It is this complex political legacy that allows the narrative to branch off into history, taking us into the diary of a wife and farmer forced into an English concentration camp in the Second Boer War where her refusal to sign in favour of the English costs her rations and more. As we also follow some of Willem’s grandmother’s life, we track South African history over the 20th century and into the 21st. The twist (stop reading now if you don’t want to know) is that the Captain who runs the camp Willem is sent to, is a van der Watt, the same as the lady writing about the concentration camp.

Though the characters’ journeys feel compelling and real, in a sense, the book is part history lesson. There is a historical note at the end of the narrative and though the characters are fictitious, they are based in fact. Damian Barr manages to bring the people of this South Africa to life. He shows their multiple motivations and their intermingled histories and connections. He points the finger at the English for their behaviour in the Boer Wars and the implications that behaviour had upon the development of apartheid. He does an excellent job of showing the complexity of South African history. Out in April of 2019, this is a novel to put on your wish list.

Next week I’m reading My Life As A Rat by Joyce Carol Oates.