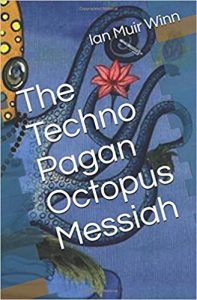 After a weekend with Terence McKenna, Ian Muir Winn takes DMT and not only sees the gods – many of them, most notably Lord Shiva – but comes to believe he is one with the gods, a messiah destined to bring a new awakening to the world through his writing. He is also reminded of a dream he had in childhood about travelling to the pyramids.

Somehow, everything starts to make a crazy kind of sense and he feels compelled to travel to Egypt and then India on a journey of spiritual enlightenment with some romantic and business diversions along the way.

The energy of Winn’s prose is palpable. You can’t help but be sucked in for a ride that combines travelogue with mystical yearning and includes several poems, the first of which you can sample on Ian’s website.

Not only is the prose energetic and full of rhythm, the situations are often as funny as they are poignant. We watch Ian clamber up the pyramids for a purple stone, which his guide later says can be found all over Egypt, the tourist police shouting at his heels. We follow him on horseback on the Saharan sands around the pyramids and on a camel in the sands of Rajasthan. He is bemused and enlightened by Sadhus and tantalised and confused by women.

Sometimes we can sympathise with other characters who find his whole messiah routine a little much, but when that’s coming from the mouths of two men travelling the world photographing the poor drinking from straws melted into different shapes, you realise that there is a message in all the madness that asks the reader to question their time and place on earth and to be open to the journey of life taking place on multiple levels of consciousness.

It is wacky, it is forceful, it is funny and fast-paced. It should be on the shelves of all backpacking hostels and hotels. You’d be hard-pressed not to enjoy the journey that is The Techo Pagan Octopus Messiah. Out on the 31st May, you can buy your copy here.