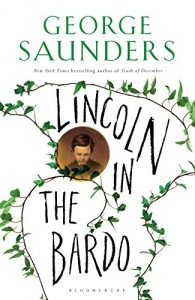 Lincoln in the Bardo is a strange and remarkable book. Set against quotations from documents written in the time of Lincoln’s presidency – quotations which privilege the elusive nature of fact and truth in the face of multiple perspectives – are excerpts of the voices of the dead residing in the cemetery in which Willie Lincoln, President Lincoln’s son, is interred. We see the Lincolns hosting a party while their son lies sick upstairs. We watch the funeral. And we witness Willie Lincoln rise up from his grave, missing his father.

There is something delightful, playful, about the mixture of fact and invention, especially when both are shown to be questionable. The President’s eyes change colour depending upon the account and most of the ghosts think themselves merely sick, despite having to return to their rotting bodies every night.

Only one ghost, the Reverend, fully understands that he is dead. He has seen judgement and fled from it. His visions of the afterlife drag the book into the poetry and moral drama of Dante. We cannot change our life once it is over, but what actions and thoughts bring paradise? The Reverend remains unsure.

This moral dimension is central to the book. The historical voices are concerned with the many numbers of dead resulting from the American Civil War. How do we judge those who send so many to their deaths?

The death of Lincoln’s own son and his love for Willie, bring him back to the cemetery where he opens his son’s coffin and cradles the child in his arms again. The ghosts are up in arms – this has never happened before. Will they once again be recognised and remembered by those they left behind when they entered their sick-boxes?

Willie enters his father. Grief opens President Lincoln up to the voices of the dead who enter him in a multitude, leaving one man in particular, a black man very keen to show the President the plight of his people.

Lincoln in the Bardo is a strange, clever, miraculous and thought-provoking book that remakes what a novel can be while reminding us of our fundamental need for story. We need stories to interpret the past, present and future of ourselves as individuals and as groups. Reinterpretation, retelling is what makes and shapes us. To be open to new possibilities about the world is the greatest state we can hope to achieve.

At once broad-ranging, multi-voiced, with an amusing sense of the indiscriminate, Lincoln in the Bardo remains a work of precision, each word chosen to speak with one purpose, all the voices working together just as they do in the moment when Lincoln becomes host for a multitude of ghosts, the book is a host for the multitude of America. Irreverent, funny and kind, Lincoln in the Bardo is a brilliant book full of George Saunders’ unique outlook and expression. I’ll be thinking about it for some time.

Later this week I’ll be reviewing The Essex Serpent by Sarah Perry.