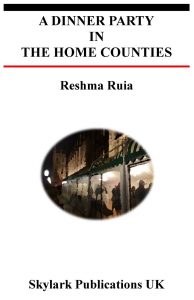 Reshma Ruia’s poems often tell stories of significant moments, shine light on the little things that prize open people’s sense of security or identity: the exhaustion of family life (‘The Beginning’); the lazy, seemingly good-natured stereotyping of people with different heritages (the title poem); how a failure in pronunciation, or effort, to say an unusual name creates a whole new person severed from their old self (‘In Which Mrs XU Becomes a Sally’); memories of partition (‘1947’); deportation (‘Mrs Basu Leaves Town’) and so it goes on. Here are people contemplating or sitting at critical moments in their lives, who often struggle to definitively claim one geographic identity. In some ways this exploration of race and cultural confusion is at the heart of Reshma Ruia’s work, but there are other themes of identity at play. What it means to be on a journey to becoming a mother (‘Egg’), or the complexities of the maternal relationship (‘Biography’) where a child must

Hold on tight my love, she says.

A gentle nudge is all it’ll take.

Away we’ll go, spilling and spluttering,

But then the mother throws them in the air herself and folds her arms as she watches her child fall.

There are poems inspired by artists, writers, musicians. There are poems that explore socio-economic difference (‘A Mrs Dalloway Kind of Day’, ‘The President Is Coming Home’) including mass refugee migration (‘A Mediterranean Summer’) and many that look at the disappointments of old age.

Sometimes what you expect to unfold, does not. The villagers from ‘The President Is Coming Home’ do not want their village hero to return and divest himself of power. He is worth nothing to them without the trappings of his office and yet it is their violence and anger that eventually frees him. This ability to shift into unexpected directions is pleasing.

Reshma Ruia is a poet clearly reflecting the concerns of her daily life with a sharply contemplative eye. I think ‘Biography’ is my favourite. It opens with ‘We are bottles of blood walking down the street’ and that rather grotesque image of our human fragility has stayed with me. Whatever your preferences, there will be something here for everyone in this collection.

I’ll be reviewing Blue Ticket by Sophie Mackintosh next.