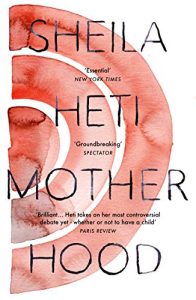 Motherhood is one of those books that will enthral some and, perhaps enticed in by glowing reviews, dispel others. It mixes a sharp intelligence with a reliance on a less complex I Ching style dice rolling for critical enquiry. It easily slips into the self-absorbed misogynies about women and their hysteria, and yet, it remains compelling and most importantly, honest. For there is no point in attempting to explore the pressures for women to become mothers and all the societal gesturing, comparisons and petty rivalries that go with it, without being honest about how much time can go into the exploration. And for that, Motherhood must be commended.

Most women can’t escape the reproductive cycle until the menopause (of course not all and much suffering is often caused for those who are untethered in this way), forcing them to face the potential of childbirth whether they want children or not. There is no similar physical, monthly reminder for men and there is a sense in which Lady Macbeth still hovers over the motherhood debate for to choose not to have children is seen to be a choice to ‘unsex’, to rebel from nature.

As the narrator – who we assume is Heti herself – tries to decide whether she should have a child with her partner, whether his lack of desire for a child with her is offensive or ennobling, she turns towards her own mother and grandmother, honouring their lives in a way that doesn’t involve creating new flesh, but this creation of words and sentences. She gives herself a free pass to focus on her creativity.

No, not everyone will like this book, but I suspect most who wouldn’t like it won’t even be drawn to reading it. Though it is a shame that many opinions won’t be challenged and altered by this book, there will still be many who are drawn to read it who will start to question their easy judgements about the childbearing choices of their family and friends. Another great reason to pick up Motherhood. It might seem inward looking, but this is an individual, internal journey that resonates out. You’ll know if it’s for you.

I’ll be reviewing Apeirogon by Colum McCann next (I know I said that last time, but Motherhood snuck up the book pile). Once again, I’ve been reading and not reviewing. I was going to write something beautifully eloquent about finding it hard to concentrate when death tolls tick into higher and higher numbers, but it’s also more mundane than that. Sometimes daily life just gets in the way and moving on to the next book becomes more appealing than writing about the one you’ve just finished. So hopefully, look forward to a glut of reviews coming soon.