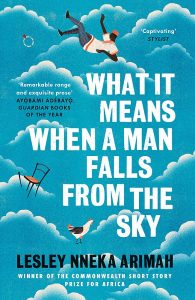 What It Means When A Man Falls From The Sky is a beautiful, diverse collection of stories. There is no one genre and yet all the stories have a definite voice that make it clear they belong together and to Arimah. This is impressive in a short story collection, to have such different stories feel as if they speak from the same place, a place that feels like a longing for home, love and freedom of expression. Lesley Nneka Arimah is a true and mesmerising storyteller.

While you have one story that might offer a more tenuous sense of closure, a meaning that is less overt, like ‘War Stories’ where a naughty daughter is told off through the medium of her father’s war stories that contrast her difficulties with those of his life as a soldier, you are then met with a story like ‘Who Will Greet You At Home’ where women must shape their babies from inanimate materials, have them blessed by their mother, and then hope patiently that their baby will survive the year until it can be properly born into flesh.

There are painful contemporary real stories about the difficulties of bringing up children across continents and cultures (‘Wild’ and ‘Light’) or during hardship (‘Buchi’s Girls’ and ‘Redemption’) set against the magical real ‘Who Will Greet You At Home’ and ‘Second Chances’ where the narrator’s dead mother reappears for a day, or the title story, ‘What It Means When A Man Falls From the Sky’ set in a near-future after the devastation of climate change when a mathematical formula allows those who understand it to reshape the laws of physics and fly, to read another person’s trauma and take away their pain. There is also a mythical story, ‘What Is A Volcano?’ where we learn just that as a seemingly trivial battle between the gods grows into something larger, ultimately creating volcanoes, told in a way that echoes the oral tradition.

Basically, there is something for everyone. I found myself immediately retelling ‘Who Will Greet You At Home’ and living with some of the tales buzzing around my mind. I know I will return to these stories and want to share them. I thoroughly recommend them.

I’ll be reading and reviewing Unmastered: A Book On Desire, Most Difficult To Tell by Katherine Angel next. I’ve been keeping up the reading but failing to post the blogs so I’ll try and catch up a little as soon as I can.