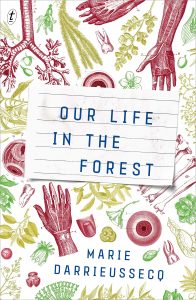 Ok, I admit it, I’m obsessed with Marie Darrieussecq. Hers is the kind of fiction I long for us to write more of and value more highly in England. Regardless of the subject, she is always striving to uncover and express quite what it means to live and breathe as a human. In this novel, she goes further and asks how the surge in population sits not only with human nature but with the planet. Are we able to be social beings on such a grand scale? If we lose touch with the fundamentals of our bestial nature, what do we become? She is also interested in the physical act of writing – how the body is part of the conveyance of narrative – and the primal nature of our desire to record stories in ways that don’t require mass production or electricity i.e. the written word, those early handprints on rock.

In Our Life in the Forest, Marie Darrieusecq contemplates a future in which cloning is used to provide spare organs and body parts for the rich. What does this mean for the clones? Do they have rights? Are they unique individuals despite their genetic replication?

Viviane is a clinical psychology. Two patients knock her normal life off balance: Patient X who never drinks the water and who wants to sit in total silence for his sessions; and her success story, a woman who survives the plane crash that kills her husband and child. The double of this patient’s husband is still alive, sleeping in the hospital bed in his induced coma, as all doubles do, even though there is seemingly no longer a need for his existence. Viviane sees him there when she visits her double or half, Marie.

Viviane herself is often sick. She needs transplant after transplant but when they take her eye, she really does see things differently. Patient X has disappeared but through a series of messages delivered by animals, he gets her out into the forest, cut free from her implanted digital devices, forced to rethink the world she thought she understood as her health and therefore her time is running out. So she scribbles, much like the piggie squiggles of Darrieusecq’s Pig Tales, telling her story before it’s too late.

It’s a gripping, brilliant book. A lot of fun to read and full of interesting thoughts about what we take for granted and what really makes the world go round.

I’ve got rather behind myself with my reviews, but I’ll be reviewing The Grace Year by Kim Liggett next.