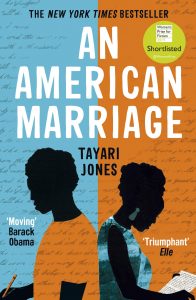 An American Marriage starts with a newly married couple, Celestial and Roy, enjoying a romantic night in a hotel. A romantic night that begins a new and troubling era in their lives when Roy is arrested for a crime he did not commit.

The novel has three parts and is mostly told from three main first person perspectives, those of Celestial, Roy and Andre, Celestial’s childhood friend who introduced the couple. Interspersed between these first person narratives are letters sent between the characters, for the most part between Celestial and Roy but this structure also allows for letters to and from other characters, such as parents, lawyers etc.

It is this structure, more than anything, that I admire. The letter is an old-fashioned device for storytelling that pushed the novel form into existence. Its use in this very modern novel looking at marriage and race-relations in America, suggests the need to create new forms from the old, new forms that take greater interest in the less heard narratives. How does being a Black American affect even the most intimate experiences of your life? This is what Tayari Jones is trying to get a wider audience to question and I think she achieves this very effectively.

An American Marriage is a novel created to spark conversation about society’s attitudes to race, gender and marriage. It is also a very moving depiction of how differently each individual approaches romantic love, and how that approach changes over time. Desire doesn’t always translate into long-term intimacy regardless of the world that surrounds it. So at the heart of this novel asking some difficult questions is an epistolary love triangle. This is very clever writing indeed and it’s no surprise that, since writing this review, An American Marriage has won the Women’s Prize for Fiction 2019.

I’ll be reviewing The Contortionist’s Handbook by Craig Clevenger next.