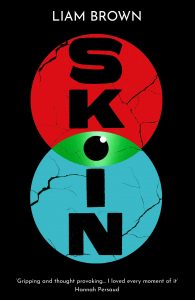 A deadly virus, spread through human contact, has forced the remaining wealthy few into isolated, decontaminated chambers; phones and computers their only means of communication with others, even their children and partners. Going outside is forbidden without prior authorisation and requires the wearing of a protective suit and mask.

This is the world of Skin, a novel narrated by mother-of-two, marketing executive, Carol. She tells her story in two threads: one which covers the outbreak and survival of the virus; and one in which she examines life in the new isolated world where she can no longer hug her children or feel the sun on her face. A chance sighting of a figure without a protective suit, spotted one day on her neighbourhood watch route, forces Carol to reevaluate the realities of the post-virus world. Skin is a great fun read for the sci-fi enthusiast as you get this double narrative arc of initial survival and then conspiracy.

I enjoyed reading Skin in much the same way that I enjoyed reading Liam Brown’s previous novel, Broadcast. It is fast paced and brimming with ideas. I don’t always feel the ideas are pushed as far as they could be, but the characterisation feels real and Brown has a knack for extrapolating forwards from our current world. Can we really be human when all our interactions are mediated through computers?

This isn’t new territory as such. Reading Skin reminded me a little of The Possibility of An Island by Michel Houellebecq, but Liam Brown is less bigoted and a little more optimistic about human nature. Is real touch any different to digitally simulated touch? What does the future hold for us as the reality of our changing world forces us to rethink the way we live now? Brown is good at putting some of these questions into stories we can place ourselves within and you’ll know if this kind of story appeals to you.

I’ll be reading An American Marriage by Tayari Jones next. I’ve got lots of books already reviewed waiting to be posted, so I’ll try and get on with it over the next few days.