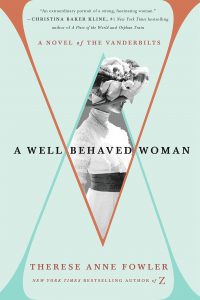 It’s hard not to be drawn to a title like this. Everything it suggests to the imagination is explored as we follow the life of Alva Smith who became Mrs William K. Vanderbilt and later Mrs Oliver Belmont.

Society and its views on behaviour are put under the microscope. Sometimes stepping outside of the generally accepted rules of conduct, is the best course of action even if it goes against what most consider well-behaved.

I thoroughly enjoyed seeing Alva manoeuvre her way from a respected family fallen into poverty, to acquiring money through marriage and then to conquering high society. I enjoyed seeing how Fowler imagined she had learned her emancipatory views on equality of the sexes and races.

The novel refers to popular novelists of the times and there is a sense in which the sensibilities of Henry James, Edith Wharton and others ripple through the novel, creating a kind of sentimental outlook generally at odds with Alva’s character, but enticing nonetheless. Fowler doesn’t allow her to escape romance, though society would certainly have restricted her access to it. Romance, as understood by Alva, is a luxury that rarely has positive outcomes.

There are moral complexities at the heart of the Alva’s tale too. Though what an individual might want to do is pitted against what constraints they are forced to work within, there are times when Alva could have behaved differently, when money is recognised as a safety net cushioning its owners and she yet chooses not to intervene in the difficulties played out around her but to comfortably sit them out. Many of her opportunities are shown to come not just from her sharp mind, but from luck and the further the story develops the clearer we see the beginnings of our celebrity culture developing; a culture in which the behaviour of the rich becomes entertainment and social mobility no longer relies on birthright but on finance. Sadly the people with money, as Alva’s story shows, don’t always behave well, so what might appear to be a positive shift away from tradition is in fact a copy of it. Alva understands she could have remained poor, could have struggled to make her way in life. The distance between those who have and those who have not isn’t shortened, it is just a different group of people who have more.

Alva’s personality is what drives the novel. She is a woman who takes decisions and acts upon them. She is a fascinating subject. As befitting the current trend, she could easily be described as cold-hearted, manipulative and selfish. She could easily be disliked simply because her ability to reason goes beyond the boundaries of what usually encloses the definition of womanhood. In that sense this novel fits the many novels seemingly inspired by #metoo that highlight women who don’t fit the sentimental mould, but who step into the limelight in all their stereotype-defying glory.

A Well-Behaved Woman is exactly what it says on the tin. It is a novel of the Vanderbilts. It is a society novel that has its cake and eats it. We get ultimate access into an exclusive lifestyle and then get to criticise it. It’s the equivalent of reality television for the nineteenth century as it moves into the twentieth. Make of that what you will.

Look out for my review of From Hell by Alan Moore & Eddie Campbell to follow soon.