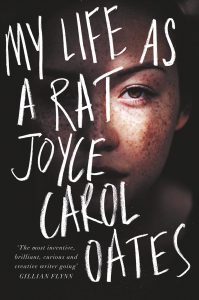 It wasn’t until I began reading My Life as a Rat that I remembered I hadn’t taken to Oates’ previous novel, Hazards of Time Travel. I had that sinking feeling that perhaps this novel would fail to capture my imagination too, but in fact what I uncovered was a character, Vi’let Rue, the youngest in a Irish-Catholic American family, that really did stay with me. It reminded me of something I read a long time ago about Oates’ method of writing. Though I can’t find the reference to it now (this is my disclaimer here), I remember her saying that certain stories came from a character and wrote themselves without planning. She was talking about short stories, but still, there is this feeling, as you read her work, of discovery; that the story literally unfolds in the writing. She finds the character and they tell her their story.

In Hazards of Time Travel I couldn’t quite find my way in the story, I didn’t care enough for the character whose tale was being told. In My Life as a Rat I found Vi’let Rue, once I’d come through her earliest family memories, an extraordinarily compelling character. She rats on her brothers who commit a race crime and this disloyalty colours (sorry) her entire life. Her truth-telling has huge consequences: disowned by her closest family she is thrust into a life of self-consciousness and painful passivity that has frightening implications. It is as if she lives the prison sentence she inflicted on her brothers and as the time passes her fear of their retribution refuses to diminish.

I’m not going to say more about the plot because that would give too much away, though strangely, and perhaps this is why Hazards of Time Travel didn’t work for me, the novel isn’t about plot. I’d need to read more of Oates’ work, but I suspect she is much more interested in characters and their motivations that a series of events. South Niagara and Violet’s hometown have their own sense of character, as if Oates is exploring the nature of that part of America and its society’s expectations from the 1990s onwards. The place has its own character, a landscape and social boundary that weighs upon those who grow up within it. To behave in ways that contravene that boundary can only ever lead to banishment either socially or literally; you cannot belong if you don’t behave in the ways laid out for you long before you were born. I suppose Hazards of Time Travel tried to explore this too, but for me, My Life as a Rat was more successful.

Oates is such a prolific writer that it comes as no surprise to be compelled by one novel and not another. How she does it is hard to say. In this novel the undercurrent of sex and violence flows steadily through the story like the snakes writhing in the Niagara River in its opening chapter. Women with knowledge are dangerous. How do you weigh family loyalty against more abstract notions of right and wrong? It then comes as no surprise that a desire for love can too easily be confused by the longing itself and also with a more naked desire. Looked at in this way, My Life as a Rat feels like a reworking of Greek myth – good and evil, family and sex, pure and impure – there are so many undercurrents for a reader to enjoy. Not out until May 2019, it’s one for the wish list.

Next week I’m reading The Dollmaker by Nina Allan.