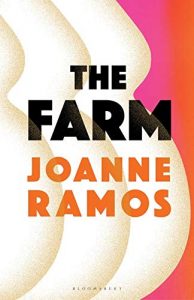 When I began describing the plot of this novel to a friend, they said, ‘Oh, that sounds like that series I saw on Netflix, you know, where not many women could conceive anymore and they were getting the fertile ones to be surrogates.’ Before he helpfully pointed it out, I hadn’t thought about the links to Margaret Atwood’s Handmaid’s Tale because The Farm doesn’t need any change in regime, or depletion in fertility, for its surrogacy plans to flourish. It wouldn’t even surprise me if such a place already existed.

By mentioning The Handmaid’s Tale there is a sense in which The Farm can be downplayed as a bandwagon book, but what is pleasing about The Farm is that, regardless of its compelling narrative, it plays out the various sides of the argument for the existence of an expensive, surrogacy service that takes young, poor, mostly ill-educated and often immigrant women, and uses their bodies – monitoring them intensely, providing all their nutritional and physical needs – to give the babies they carry the best chance of healthy delivery.

Whilst on the one hand these women surrogates, described as Hosts or numbers, are seemingly managed as cash cows, their payments cancelled or bonuses rescinded for bad behaviour or failure to deliver, they are also given voices by the narrative. The moral complexities and uncertainties of the modern world unravel beautifully through the magnifying glass of Golden Oaks (aka ‘the farm’).

What matters most? Family, money, success? How do we manage these across the globe? How can we judge the motivations of others if we don’t understand their situations or needs?

In a strange way, I’m drawn once again (I think of it often), to that wonderful George Saunders short story, ‘The Semplica-Girl Diaries’ where a middle class man of struggling means, tries desperately to please his daughter by buying her the latest garden accessory: a row of women hanging and swaying in the breeze like washing attached to the line through holes in their skulls. The women are poor and mostly immigrants, trying to improve the lives of their families by earning the kind of money the other jobs they could access simply cannot match.

The novel explores the impact of economic disparity. It shows how what we chose to do to safeguard the welfare of our children, or the care of our elderly, is as dependent upon our social status and economic security as it is on our moral framework.

At one point, one of the main characters Mae Yu, the self-made, mixed-race woman who manages Golden Oaks, mentions research that points to the correlation between wealth and empathy. The more wealthy people are, the less empathy they have. This is something the novel tries to unpick from many different angles and in the end, it is this complexity of viewpoints, this multiple exposure of what lies beneath the lives of the four main women in the story – Mae, host Jane, host Reagan, Jane’s cousin Ate – that really gives this novel its punch. There are no simple answers, no black and white choices. The agony of the rat race, the continuing gender imbalance of managing a career and family, the complications of love, the difficulty of compromise, mean that The Farm ends up asking a lot more questions than it solves. It says, ‘Here, look at this complicated seam of problems that is family and reproduction in our modern world. What do you think of it?’

The novel ends with the perspectives of the two mixed-race women, Mae and Jane. What does it take for them to make it in America? What does success mean? What is worth sacrificing for family? You don’t expect the novel to necessarily go where it does, or end where it does and this makes it challenging and interesting. This a striking book, setting new discussions over women and their bodies in a global economy. Not out until May 2019, I suspect The Farm will be a much discussed novel.

Next week I’m reading the Nothing Holds Back the Night by Delphine de Vigan and as a Christmas special I’ll be uploading a few reviews that week. I’ve been reading more than one book a week and need to catch up with myself! So, happy holiday blog reading.