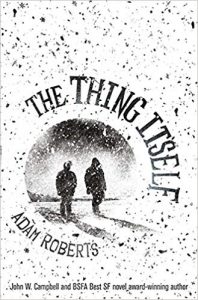 The story begins when Charles travels to Antarctica with Roy Curtius in 1986 to search for signs of alien life. Roy is obsessed with Kant and his certainty that humans define the universe by what they can perceive through the limits of their senses and imaginations, rather than the thing-in-itself, the ding an sich, which exists outside of our ability to perceive it. He doesn’t have friends and therefore receives no letters.

Charles sells him one of his letters for £10 and Roy has an idea.

Something then happens out on the ice. Something that, along with Roy, nearly kills Charles. Did he see alien lifeforms? Did he step beyond the reach of his humanity and see into the ding an sich? What really happened in 1986?

The novel does its best to explore this.

I suspect I only understand some of what the novel explores. Apart from the Kant – of which I know little – there is also an exploration of what AI really means and the morality of creating consciousness, as well as whether our universe could really have happened without some godlike creator.

The prose switches between a more commercial, page-turning narrative from Charles’ perspective, to passages that mirror styles from both the past and an imagined future, giving us characters whose thoughts and perceptions provoke questions about Charles’ story and experience in a way that points to the pieces of a wider picture more than it necessarily resolves those pieces into one final image. This play with style and formula is impressive and surprising, making The Thing Itself science fiction of the most interesting kind in that it is literary as much as it is any other genre (thriller, horror, crime).

As I say, I’m not sure I entirely understand everything Adam Roberts is telling me, but I am provoked into wonder about who we are and whether what we believe to be real is actually so.

If you enjoy a thriller mixed in with philosophy, artificial intelligence and the paranormal then you will really enjoy The Thing Itself. It’s pleasant to read something that focuses on the story and not on the confines of a specific genre.

Next week I’ll be reading My Sister, the Serial Killer by Oyinkan Braithwaite.