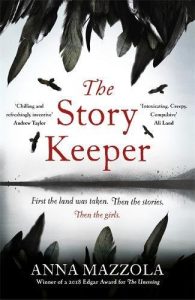 It’s 1857 and a young woman of middling birth named Audrey travels to the Isle of Skye to help the lady of the manor collect and edit a collection of Scottish Folk Tales. She is going against her father’s wishes and the advice of her step-mother. She hasn’t even told them where she is going. They consider it unladylike to take a position but would be more horrified that the position was in Skye where her birth mother died.

In part Audrey is running from an experience that clouds her conscience, in part she is running towards information about her mother whose death her father refuses to mention and whose passion was also to collect and record local folk lore.

As the people of Skye are being cast from their homes—the landowners now making more money from livestock than tenants—many of them heading to the mainland or the colonies, the old Gaelic ways, the superstitions, stories and culture are being lost. Mrs Buchanan of Lanerly Hall means to preserve these tales and with Audrey, a gaelic speaker, as her assistant, she hopes to collect as many and as quickly as she can.

But the tales of Skye are not for the faint-hearted. The folklore conjures dark fairies, the black and feathered Sluagh; spirits of the restless dead that screech in the wind and circle in terrifying murders like crows, swooping down and taking people as play things. When girls die and disappear, the crofters blame the Sluagh, but what, or who, will Audrey blame?

The quotation on the back cover, taken from the novel itself, in which communities are said to have their own stories ‘to make sense of their world… [to] see the reflection of humankind: its strength, flaws, hopes and fears’ is the essence of what the novel seeks to explore. Story keepers, story writers, narrative itself is the thread that weaves our lives together and sometimes this weave is terrifying and opaque.