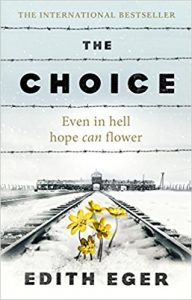 The Choice isn’t the kind of book I usually review. I don’t often write about autobiography or about psychology, but Edith Eger’s story is remarkable. Sent to Auschwitz at sixteen, Edith is a survivor of the Holocaust whose journey to freedom is all about the choices we as individuals are free to make. She recounts the story of her time at Auschwitz, her rescue by American soldiers, and her journey through life as she has her own family and emigrates to America.

Despite the seeming freedom that the end of the war brings, Edith does not feel free. She feels imprisoned by feelings of guilt and fear but it takes her a long time to realise this and to take steps towards a fully-fledged sense of freedom.

Now a clinical psychologist and speaker intent on helping others to help themselves, Edith’s book is full of energy. Once forced to dance for Mengele, she still ends her talks with a high kick.

It’s hard not to write a bundle of clichés about this book. By saying that Edith Eger’s personality shines through her difficult account with humanity and generosity—which it does—there is a sense in which these overused phrases diminish the charm and vitality of the book as much as they diminish the horror and suffering. Some people have said Edith’s story is like reading about an Anne Frank that lived. Just read it for yourself and find out. It’s an inspiring read.

I’ll be reviewing The Story Keeper by Anna Mazzola next.