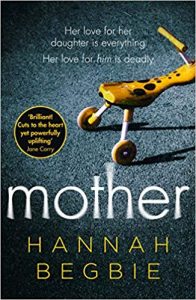 Dave and Cath have been trying for babies for years. They had pictured a large house bustling with the noise and clatter of a happy family—several children, four perhaps?—and as the months and years of failed attempts build up the distance from their dreams feels suddenly shorter at the birth of their daughter, Mia. But Mia isn’t all right. Her little face grimaces at feeds. Her sweat tastes of salt.

At only a few weeks old, Mia is diagnosed with cystic fibrosis.

The doors between Dave and Cath, closed over the IVF disappointments and in the dark times after Cath’s father died, form more permanent barriers between the couple making communication, even seeing the other clearly, almost impossible.

Then Cath goes to a cystic fibrosis support group and meets Richard whose own daughter is a teenager. He is overflowing with positivity, hope and vitality. He works with CF charities and encourages Cath to do her part to fight for her cub in the wider world. It’s a fight that brings her into more and more contact with Richard.

To say much more would spoil the novel. Mother encapsulates all the unwieldy emotions of bringing children into the world combined with the despair, blame and guilt of bringing a sick child into the world. Cath’s relationship with her own mother takes the difficult CF diagnosis into a social landscape we can all relate to. To hone these complex emotions into such a compelling narrative is no mean feat and Hannah Begbie has done an excellent job.

Told from Cath’s perspective, filled with the stale hours of silence and regret, rooms empty of everyone but her beautiful young daughter struggling for breath, and flesh raw from endless bouts of cleaning, Mother is a powerful novel that forces us to remember the importance of communication and the need for honesty and self-forgiveness. It’s hard to write honestly about what motherhood feels like, the exhaustion and frustration as well as the love. In Mother, Hannah Begbie has managed to not only do that but also to write about mothering a child with cystic fibrosis. The subject matter won’t appeal to everyone, but if this peaks your interest you won’t be disappointed.

I’ll be reviewing The Choice by Edith Eger next.