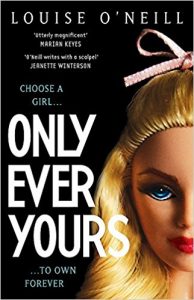 I was reading one of those lists – ‘what to read next after watching or reading The Handmaid’s Tale’ – and came across this novel by Lousie O’Neill. Its concept intrigued me. The idea that women were no longer ‘born’ but genetically designed to fulfil certain roles: companions, concubines or chastities.

The companions are like the wives. They provide the next generation of sons and are replaced when they grow too old or ugly.

The chastities look after the growth of the girls as they make their way to the Ceremony when their roles are assigned by the boys. Either they will be chosen to be companions, or they will be given the role of concubine or chastity.

I won’t go through the actual plot because that would spoil the novel. I should also say that it was written for the YA market and I think that does affect its scope. The ideas bristle with discomforting resonances for our social media world filled with a health and beauty industry encouraging an unrealistic and competitive cult of youth and beauty. Every year the girls rank each other based on who is the most beautiful and popular.

Despite this tantalising social commentary, I would have liked to learn more about the designers working on the development of these genetically designed girls. I would have liked to have seen further beyond the walls of their compound into the outside male-dominated world. Perhaps there will be a sequel. I’d read it.

Thought-provoking and disturbing, Only Ever Yours is a painful interpretation of what men might say they want women to be. If you can genetically control the female population, what does society lose if women are ever designed well enough (in the book’s terms) so that they can no longer think for themselves? It’s a frightening thought, one that the main character, freida (note the lack of capitals), helps to ask as she blunders painfully towards her Ceremony.

Next week I’ll be reviewing Transit by Rachel Cusk.