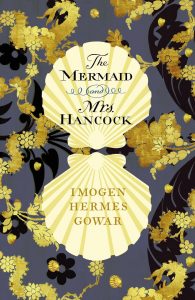 Eighteenth Century London, whores, merchants and mermaids; The Mermaid and Mrs. Hancock has them all and knows how to play each part to create a beautiful symphony. The language is rich and unguent. The characters full of emotions and desires.

Sometimes you open a book and feel certain of where it is headed, but The Mermaid and Mrs. Hancock takes surprising roads in its exploration of the different strata of London. We follow one young mixed race girl as she rejects notions of a black brotherhood. We are confronted by the anger of shipbuilders not paid properly for their honest work that supports a whole Empire of trade. And we see the scope of women’s lives in the poor and new middle-classes. 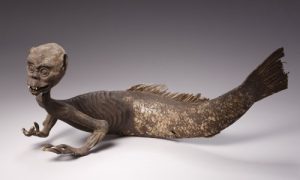 There is a lot of thought and breadth to this novel that also tantalises the reader with the prospect of two mermaids: one very much like that at the Horniman Museum in London, all monkey-headed with sharp teeth and nails and a fish’s scaly tail (see the image on the left and follow this link for more info); one something much less tangible and yet more palpable and more haunting.

It is fun to read a book that mixes grit with a flavour of the magical-real. Imogen Hermes Gowar has wit and intelligence, and casts a modern eye over the London of our past.

You can come and hear Imogen Hermes Gowar read from the novel at the next City Writes event on the 28th March, 2018. See here for tickets. As well as listening to Imogen, you’ll be able to buy the book, get it signed, and hear from other alumni writers of City University Short Creative Writing Courses.

Next week I’m reviewing Fire on the Mountain by Jean McNeil and I’ll have a book to give away so do watch this space.