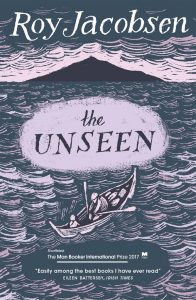 I really enjoyed being immersed in the natural world of The Unseen. Island life off Norway’s coastline back in the 20th Century – though it could almost be anytime – is a delicate balance of resources, humans against animals, crops, the ocean and the weather. The blowing of the wind, the changing of the seasons, the softness of the eider down plucked from the eider ducks that nest beneath their front step, these things have a texture and smell, a visceral life that ensnares the reader.

We follow the family living on Barrøy as the younger generation grows and takes over the running of the island. We see them face the changes of the developing century. We watch Ingrid, the young daughter, move from childhood to adulthood and it is my interest in the continued story, her story, that draws me on but also makes me feel frustrated when I come to the end. I could have read on about this family. I would have been happy to have read generations of island life.

It’s a beautiful, magical novel that feels the ebb and flow of the currents of sea and wind, but it is also a quiet novel, one that leaves you wishing for more. There are secrets and compromises that the land and its people will not ever fully reveal. Barrøy is an island that offers haven and possibility alongside harsh survival making The Unseen a novel laiden with a feeling of myth.

This week I’m reading The Mermaid and Mrs Hancock by Imogen Hermes Gowar.