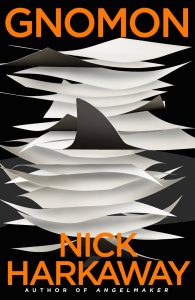 Set sometime in the future, in a radically democratised UK under the constant and supposedly benign surveillance of a computer programme, a woman dies in custody. Diana Hunter was a known antagonist of the system and was having her head examined – her memories literally reviewed – by the Witness when she died.

Inspector Mielikki Neith will be investigating the circumstances of her death and, as the novel itself explains in the opening, she will soon lose ‘faith in everything she has believed in her life’, especially the system.

I loved this novel. I loved its complexity, the way one story bled into another, the way the past, present and future seemed to meld, constantly questioning your sense of story.

As Mielikki Neith goes through Diana Hunter’s Witness sessions (this is done through a kind of mental feed so that she relives the memories as if they were her own), she finds herself exploring dreams and memories of more characters than she bargained for. The weavings of myth (unsurprising given many of the names Harkaway uses), religion, mathematics, and many other systems of belief, lead to a pleasing array of thoughts on self-governance, systems and the constraints that a desire for rest and safety put on our own understanding of ourselves and the world around us.

The book is gripping and at times delightfully bemusing. However, by the time I reached the end and the narrator, Gnomon itself – a colonising mind from the future – leaves us with the thought that stories write their way into readers, redefining readers whilst immortalising themselves and even colonising the minds of others, I felt unsure of my own response. There was an arrogance here that deadened the beauty of the novel into something less exciting, less anarchic, but perhaps I just enjoyed the story too much and simply wanted it to go on.

As well as challenging the human instinct to trust and be faithful to the systems we are born and raised within, Gnomon is simply a fun and riotous read. It’s not surprising that terms like labyrinth have been used to publicise it, but who the monster is at the centre and how we should feel in response to them, whether we should pity, kill or escape from them, remains uncertain for me. It may all become clear as greater distance builds between me and my reading. One thing is certain, I’m still thinking about the book. It still lives inside me and this is both an exciting and chilling prospect. There is no denying Nick Harkaway’s story spinning skills.

I’m going to take a break from the blog in November. I’m telling myself I’m going to focus on my writing, but I’ll probably spend most of my time preparing for teaching and worrying about my new puppy. Look out for further reviews in December.