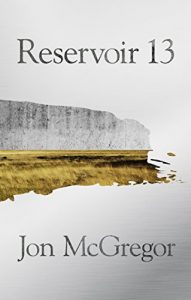 Reservoir 13 begins with a search for a missing thirteen-year-old girl, visiting the village with her parents.

It’s easy to imagine where the novel will go. There is the possibility of a murder mystery or a crime thriller. You read on eager to take slow steps further into the lives of the villagers, the parents, perhaps even the young girl, Rebecca Shaw, but as the seasons pass and the press move back to the towns, as the mating cycles of the local birds, the foxes and badgers are described with the accompanying change in weather, that closer, deeper, more personal step never quite happens.

This overarching distance is what makes Reservoir 13 so unusual. You can see the changes in the countryside and its inhabitants at the same pace from the same perspective. This is not to say that we don’t swoop in and follow small intimate moments in each villagers life, moments that provoke reader reflection and interpretation, but we don’t stay focussed in for long. We watch the village from a distance, always returning to the memory of the missing girl, Rebecca, Becky, Bex, whose absence marks the landscape and provides a refrain for the passage of time.

I admire the lyrical and precise litany of reference to the plants, animals, structures, and humans living around Reservoir 13. I admire the distance that forces the reader to tease out the stories. It’s a considerable feat to write a novel like this. To remain so far away, to offer a reader such a privileged omniscience. And yet, I’m not sure that I like it.

It’s easy to write about a book when it absorbs and engages you, when a turn of phrase entices you in and carries you from one chapter to the next. When a novel is well-written, provocative in its questioning of what it means to write about the world, to judge it and give it a frame, it should be easier still, but I found myself constantly yearning to know more. I wanted to live with each of the villagers for longer. I wanted to know more about their thoughts, their hopes, their dreams. I didn’t want to guess at them – as I might in life – I wanted the privilege that writing, and novels in particular, can offer, that sustained and in-depth access into individual minds.

Reservoir 13 wants us to see the broader brush strokes, to give our own lives perspective in the wider whole, and the way Jon McGregor gets us to question our lives is radical and not always easy to read. You need to pay attention. You need to seek out the detail. You need to become the storyweaver, the novelist yourself. It’s hugely impressive but it leaves me melancholic and curiously unfulfilled. I can imagine this is a novel that will divide readers. Some are going to absolutely love it and others are going to find they start the novel and never finish it, leaving the question of whether the missing girl is ever found an unknown.

It is also radical not to write an ending that neatly answers the opening pages of a novel. That, for me, is a beautiful thing, but I remain unconvinced by Reservoir 13 simply because I delight too much in the dance into another person’s head.

I’d love to hear what other people think of this novel. If you get a chance, do write a comment and let me know.