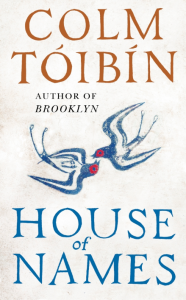 The story of the fall of the house of Agamemnon that begins with the sacrifice of his daughter Iphigenia, is an old one given a new interpretation in the House of Names. The lineage of this story allows for a dramatic turn of phrase that brings blood, despair and suspicion into the language of the characters Tóibín chooses to tell the story. This makes the novel pleasingly operatic.

Clytemnestra is full of vengeful anger. She sees the world as a place deserted by the gods whose care for the affairs of men has waned, and whose influence therefore is fading too. To pray for guidance is useless; to fear acting without the favour of the gods is pathetic: the gods do not care.

The other voices, those of Electra and Orestes move within this new world very differently.

Tóibín has chosen to let the women speak for themselves, boldly proclaiming their stories in the first person. Orestes speaks in the third person, at a significant distance that suggests the way in which his story is subject to the actions of others.

While Electra takes on her mother’s world, regretting the loss of the old, but moving with agency into the new, Orestes seems to be the only human acting with a conscience rather than for personal gain. This makes him dangerous in a different way.

Clytemnestra is a monster for acting without the guidance of the gods. Orestes is equally monstrous for committing matricide, even though he acted according to others’ wishes.

The movements of old myths force certain human battles into the forefront. House of Names is all about human lineage. When characters arrive in their homes, or the homes of their relatives, they call out their own name as a way of forcing recognition. The name holds greater authority than the person proclaiming it. Hidden within these structures are questions about our human identity. Do we come from the gods? Is our life subject to their whims, to external laws, rules, morality? Are women always harbingers of evil (for Eve moves within the folds of Clytemnestra’s musings, carelessly bringing human knowledge against the gods)? Can we trust those of our own blood? Can we ever escape blood shed at our hands?

Caught in the middle of this questioning, this shift in outlook, is Orestes whose story is the most changed by Tóibín’s retelling. Orestes is the man caught in a sea of human history, forced to the head of the tide by external forces, wanting to act for the best but always cast adrift again, an observer whose only acts force him further from society. All he wants is to live at peace with those he loves. Best placed to rule for the people because he cares for them and not just himself, he is ignored despite his heritage, and not only because of his matricide but because he doesn’t have the politician’s art. The novel ends with him hoping he can regain the friendship of Leander and we hope alongside him.

If Clytemnestra’s godless world belongs to the politician, what room is there for friendship? What becomes of human morality? Tóibín’s retelling of this myth privileges the human experience over that of the gods and puts the story into a labyrinth of conflicting human interests that uses religion for its own means. In this way House of Names is a bleak modern retelling that ends with a faint hope for a future in which blood doesn’t rule your destiny. It is a thoroughly engaging read.

Next week I’ll be reviewing White Tears by Hari Kunzu.