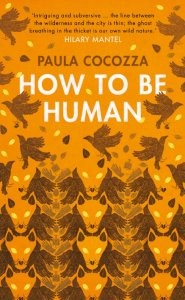 How to Be Human explores the boundaries between the human, the domestic and the civilised and the animal, the untamed and the wild all within one area of East London where a cluster of houses surround a small area of wasteland some consider woodland.

In among the dumped wardrobes and mattresses grown over with blackberry bushes, surrounded by ivy-covered trees, on a small patch of land that sits between the fenced-in human gardens, lives a fox. This is his territory. He moves between the gardens and houses, the woodland, under the fences, leaving his mark, scenting what belongs to him.

When he starts to visit Mary, a woman not long out of a failed and controlling relationship, something shifts for her. The confined propriety of London living begins to fray alongside what others in her street consider to be her sanity.

She begins a relationship with the fox.

Unable ever to name him, the novel stumbles over all the muddied territory of human animalness, exposing our attempts at civilisation for the games they are.

I really enjoyed the novel, though one could argue it is another way of asking how we can possibly hope to stand outside of instinct, beyond the genetic pressure to procreate, and whether we should even try. For all the solitude of city living we all desire to generate something, to feel some thrum of creativity running inside us. Why? And is it ever possible to really let another being, human or animal, in? Perhaps we are always alone…

I think part of me wanted something sharper, something angrier at its core, a fuller wider exploration of the fox and how he thinks, but this might have made it a different novel. As it is, How to Be Human is intriguing and surprising in all the predictable ways we try to imagine we don’t conform to. I will look forward to Paula Cocozza’s next novel and would be surprised if this book doesn’t find it’s way onto a few awards lists.

I’ll be reviewing House of Names by Colm Tóibín next.