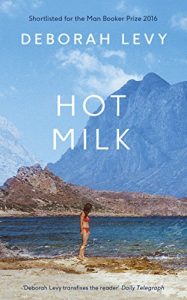 This is the first Booker shortlisted novel I’ve read this year and Hot Milk didn’t disappoint.

Sofia travels to Spain to accompany her mother in her treatment at a private medical centre. For as long as Sofia can remember her mother has complained of aches and pains and has needed Sofia to tend to her, to fetch and carry, to bear the burden of care.

Her mother has mysterious pains in her feet that make it difficult for her to walk. She says her feet are numb, senseless, useless. When she can walk, she hobbles.

The medical centre forces Sofia and her mother to confront the mental health issues that beleaguer both their lives.

Though the novel does not end in surprises, the pleasure of listening to Sofia confront herself and her mother makes you eager to read on. The sea surrounding the beaches is swarming with jellyfish, ‘medusas’ as they are called in Spanish, and Sofia is repeatedly stung by their tendrils, her flesh marked, though not quite turned to stone, by the encounter, leading her back again and again to the medical tent where she is forced to list her name and occupation.

Around and around she goes, denying, confronting, reimagining herself as a woman who swims with monsters, who may even be a monster – at least according to one of her lovers, Ingrid, a German woman whose desire is illicit and who has been monstrous to her family in ways reminiscent of other Greek myths surrounding women. The fact that Sofia is half Greek, enforces these mythical undertows, making her exploration of self a journey that embraces female metamorphosis. What does it mean to be a mother? What does it mean to be an independent woman, no longer dependent on her parents, denying belief in both god and fatherhood?

The fact that Ingrid sews a word onto a top for her, a word misread as beloved that is in fact beheaded, yet again brings to mind the myth of Agave and her son, King Pentheus. Sofia herself seems destined to be stuck on a spike by her mother, torn to shreds by mother’s obsession with illness, with all that is wrong in her world.

It seems right that Sofia is an anthropology pHd student who has abandoned her studies for her mother. All these myths float in the sea of jellyfish, stinging her over and again. It’s a fun and atmospheric read that allows the reader to dance over these old stories nestling deep within a very modern story about coming to terms with the self in a world in which human beings, if they are lucky enough to be born at a certain place and time, can drift like jellyfish, mindlessly reaching out their tendrils for food without any move towards self-fulfilment, just drifting on the currents of the waters that bore them.

You can see how fun this playfulness can be. Hot Milk is thoughtful, contemplative, and surprisingly acute. Not only do we feel the heat of the Spanish sun and hear the angry barking of next door’s dog, we are provoked into thought. What do we force our children to bear? Can Sofia stride out into the world free of these clinging arms pulling her under? Read it and see.

This week I’m reading The Sellout by Paul Beatty, this year’s winner of the Man Booker Prize, just to see what I think.