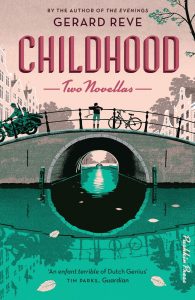 Both novellas in the collection, Werther Nieland and The Fall of the Boslowits Family, have a strange air of directness to them. Set in Amsterdam in the Nazi occupation, the voice of the child in each instance has a self-absorbed air that distances the narrator, shows them to be too busy with the anxieties of youth to clearly see the wider implications of the situations unfolding around them.

There is almost a psychopathological distance, especially in Werther Nieland, and though both stories observe the lives of others, Werther Nieland has a main character who enjoys maiming and killing animals.

The child’s record of events is an attempt to understand the adult world, to translate it into a series of motivations and actions that hold sense for the child. In this way, it can be rewarding and disturbing for the adult reader to fill in the context the child misrepresents, especially in the second novella, The Fall of the Boslowits Family, where the reader better understands the political situation surrounding the Boslowits family as the Nazi occupying forces move in. The child’s voice heightens the sense of the inevitability of events and limited control of the individual. Different family beliefs, mental and physical illness occur in the world of both novellas and the minutiae of differences between families and individuals is something both child narrators try to comprehend. Whilst they have no control over the world around them (perhaps why the first narrator in Werther Nieland is keen to set up clubs and blow up animals), neither do those they observe. Things happen and that’s the way it is. This level of narrative control – balancing the character’s experiences and expressions whilst manipulating an adult reader’s perceptions – is extremely impressive.

An intriguing and disturbing insight into the confusions of childhood, Childhood: Two Novellas is a fascinating collection. I’m not sure I could say that I enjoyed these stories, but I was engaged.

Next week I’m reading You Will Be Safe Here by Damian Barr.